The unprecedented press conference on January 12, 2018, held by the four of the Supreme Court’s senior-most judges: Justice Chelameswar, Ranjan Gogoi, M.B. Lokur, Kurian Joseph, accusing the then Chief Justice Dipak Misra for arbitrarily exercising power to allocate the cases in an unbridled and singular way, laid the touchstone for challenging the prerogative of the unchecked powers enjoyed by the Chief Justice of India. Following this event, the former law minister Mr.Shanti Bhushan had filed a PIL challenging the self-proclaimed supremacy of the Chief Justice of India by a declaration of the principle of master of roster. Despite that the apex Court’s verdict amounted to upholding the axiom by quoting the unique position of the Chief Justice of India of being first amongst equals and hence, he occupies a unique position with the ‘exclusive prerogative’, the decision does not establish a good law.

Hence, this article brings forth some new grounds based on which the exclusive prestige enjoyed by the Chief Justice of India could be attacked.

[A] Absolute discretion is against the rule of law;

[B] It violates Article 14 of the Constitution;

[C] It violates the principle of natural justice.

ABSOLUTE DISCRETION IS AGAINST THE RULE OF LAW

In the words of Sir Cecil Carr, delegated legislation is ‘a growing child called upon to relieve `the parent of the strain of the overwork and capable of attending to the minor matters, whereas the parent manages the main business. In other words, the over-burdened legislature tends to delegate its lawmaking power to the executive and judiciary to supplement it with rules, regulations, bye-laws etc. which act as flesh to the skeleton-like legislative framework so devised.

In pursuance of the ambit of delegated legislation, Article 145 of the Indian Constitution empowers the Supreme Court to makes rules for regulating the practice and procedure of the Court. In exercise of the power conferred by sub-Rule (2), Rule 1 of Order 1 of Supreme Court Rules, 2013 has come into force, which is nothing but delegated legislation under the compass of administrative law. As per Rule 2 of Order 6 of the Supreme Court Rules, 2013, Chief Justice of India has the power to constitute the Benches and allocate cases. Since the allocation of cases and Constitution of benches are the administrative functions of the Chief Justice conferred by the delegated legislation, it comes under the ambit of administrative law.

The administration possesses vast discretionary powers conferred to it by the administrative law and if complete and absolute freedom is given to it, it leads to arbitrary exercise of power. The wider is the discretion, the greater is the possibility of its abuse. Hence the basic rule should be that the governing power wherever located must be subject to fundamental constitutional limits.[1] It was in the case of S.G. Jaisinghani v Union of India[2], the Court held,

“The basis of Constitutional System is the rule of law, which ensures that every power must be confined within the constitutional limits ensuring non-arbitrariness.”

Hence, in accordance with the principle of power corrupts and absolute power corrupts absolutely, the absolute discretion vested solely in Chief Justice concerning the administrative functions like Constitution of benches and the allocation of cases[3] i.e. master of roster, is likely to result in arbitrariness which is the antithesis of the rule of law, hence violative of Article 14.[4]

Taking a constitutional note, the interpretation of Article 12 does not include within its ambit ‘judiciary’[5]. However, a distinction has been brought in the judicial and administrative functions of the Court. The former functions enjoy absolute immunity from being challenged, but the latter are subject to the fundamental rights. Therefore, in the light of the administrative powers conferred upon the Chief Justice of India, which happen to be under judicial scrutiny, any abuse of such prerogatives is likely to attract a review of earlier judgments like Prakash Chand[6], in which the Chief Justice was held as an absolute master of roster.

The Rule of Law rests on the cushion of checks and balances; One-upmanship is totally out of tune with the working of the Constitution. Therefore the opinion of the Chief Justice with regard to the exercise of his administrative power of constituting the benches and allocating the cases, must not be his individual opinion, instead it should be an opinion formed collectively by the body of men at the apex level of the judiciary.[7] Absolute discretion has not been vested in the Chief Justice. Hence, a consultative process with the four senior-most judges is a reflection of opinion in real sense.[8]

IT VIOLATES ARTICLE 14 OF THE CONSTITUTION

The concepts of equality and arbitrariness are sworn enemies, with the former belonging to the rule of law and the latter, to the whims and fancies.[9]

In contrast, Supreme Court Rules, 2013[12], interpret Chief Justice as Chief Justice who has been appointed under Article 126 of the Indian Constitution. Here the master of rooster is solely the Chief Justice who in accordance with Rule 2 of Order VI, has the sole discretion to constitute benches and allocate cases. The collegium is not interpreted as to include the four senior-most judges of the Supreme Court.[13]

It was in the case of In re. the Special Courts Bill, 1978[14], the Court affirmed that an arbitrary and uncontrolled discretion to direct similarly situated functions to be discharged by different procedures, in the absence of any reasonable basis for rational classification, amounts to a violation of the principle of Rule of Law enshrined in Article 14.

Therefore, the appointment of judges under Article 124 of the Constitution and the allocation of cases and Constitution of benches under the Supreme Court Rules are the administrative functions of the judiciary. With both the functions coming under the same head, there lies no differentia as to why in the former function the collegium is inclusive of four senior-most judges of the Supreme Court and in the latter, sole power rests in the Chief Justice. This is arbitrary and violative of the rule of law under Article 14, wherein an equal treatment for all that is similarly circumstanced is warranted.[15] This amounts to an unreasonable classification without any nexus to the ultimate objective to be made, with regard to the discharge of two administrative functions.

IT VIOLATES THE PRINCIPLE OF NATURAL JUSTICE.

It was in the case of Tulsiram Patel that the Supreme Court held that non-observance of the principles of natural justice too violates the right to equality. However, the principles witnessed sheer violation in the recent plea of sexual harassment lodged against the then Chief Justice Ranjan Gogoi. The Constitution of the internal inquiry committee included the one judging his own cause, (Nemo judex in causa sua) that is the Chief Justice (accused) heading the committee himself. The denial of the representation ( audi alteram partem) to the victim with practically no consideration of the weak bargaining power she has before the man titled as Chief Justice, underscores the blatant violation of natural justice.

This is nothing but an abuse of the absolute administrative discretion vested in the Chief Justice concerning the administrative work, thereby amounting to arbitrariness. Hence, a higher possibility of biasness is likely to be exercised. In the cases wherein he has an inherent interest, his recusal is deemed to be the way to safeguard the credibility of the judicial institution. Hence any violation of the principles of natural justice makes the exercise of powers void and ultra vires.[16]

Having studied the severe criticisms against the vesting of absolute discretion in the Chief Justice of India as master of rolls, this article explores even the inevitability of such a sustained practice with due regard to the limited and hectic judicial time frame. Such a repetitive consultative process for the daily allocation of cases is further likely to slow down and hamper the speedy delivery of justice. Further, the Indian judiciary offers at every step, an arrangement of checks and balances and therefore, all the decisions in violation with the principle of natural justice can be set aside by reviews and appeals to larger benches and higher courts. However, any exercise of arbitrary power should be stemmed from scratch.

To conclude with, for every justification available to support the doctrine of master of roster, any arbitrary exercise of power by the Chief Justice should either be read down or struck down as ultra vires of the Constitution or there should be safeguards to be built into it. 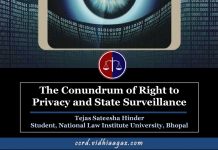