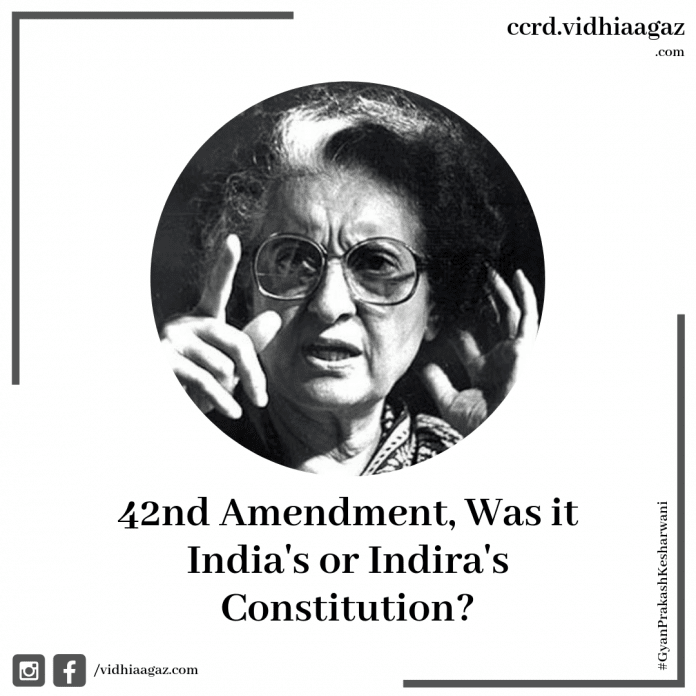 42nd Amendment “is responsive to the aspirations of the people, and reflects the realities of the present time and the future.” With these words in her speech, Indira Gandhi introduced the most criticized amendment to the Indian Constitution.

What were the changes 42nd Amendment brought, what were the consequences of these changes and how the Constitution was brought back to its original form? These questions make the most essential part of the syllabus of Indian Constitution in law schools. Let’s start finding these answers from the time when these all started.

Background of the 42nd Amendment

On March 19, 1975, Indira Gandhi had to visit the Court for her witness in an election plea. It was the first instance where a Prime Minister had to visit the Court during its tenure. It was also for the first time after Independence where Seven and a half lakh people under the leadership of Jai Prakash Narayan were chanting slogans like ‘सिंहासन खाली करो कि जनता आती है’ and ‘जनता का दिल बोल रहा है, इंदिरा का आसन डोल रहा है’ and agitating against the government. Massive rallies were being organized against the Prime Minister, and the whole country was against her. 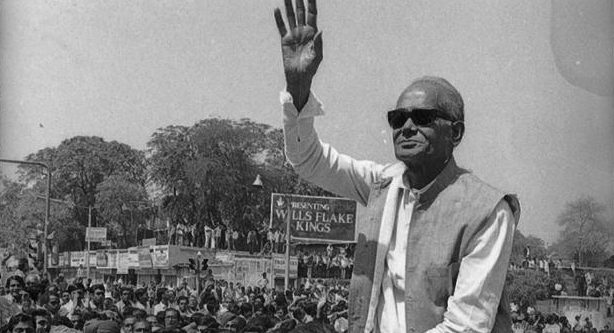 Describing emergency time as the need of the hour, Indira Gandhi constantly revised several constitutional provisions in that period. 42th Amendment was passed after the change of several provisions of the Constitution through the 40th and 41st Amendments.

Shortly after that, June 12, 1975, became a historic day in Indian history where the Allahabad High court canceled the election of Indira Gandhi. Soon after that, on June 25, Emergency was declared in the country. It initiated the phase when the government started changing the soul of the Indian republic through the Constitutional Amendments.

38th Amendment to the Constitution was passed on July 22, 1975, first time after the Emergency, where the Judiciary was stripped of the right to make judicial review of the Emergency. Soon after two months of this amendment, the 39th Amendment to the Constitution was introduced with the intent to keep the Prime Minister’s post for Indira Gandhi. Since the Allahabad High Court had canceled the election of Indira Gandhi, 39th amendment stripped off the right of High Courts to investigate the election of a person appointed to the post of Prime Minister of the country. As per the amendment, the inquiry and investigation of Prime Minister’ election could only be done by the committee constituted by the Parliament.

Two changes were made in the Preamble. Firstly, the Characterisation of India as “Sovereign democratic republic” has been changed to “Sovereign socialist, secular democratic republic” and Secondly, the words “unity of nation‘ were changed to “unity and integrity of the nation“. The Act of adding these words were severely criticized by H.M Seervai as these words were ambiguous and should not have been inserted in the Preamble without reason.

Further of 42nd Amendment provided for the readjustment in constituencies for election to Lok Sabha, and State Legislative Assemblies, after every census held after ten years at the point of 1971 census till the holding of the first census after the year 2000. The Number of seats for SC and ST tribes in Lok Sabha was also frozen. A person holding an ‘office of profit’ is disqualified from the membership of Parliament or a State Legislature and the court’s power to declare what was an office of profit was ceased. The boundation of President under Article 103 to follow the opinion of Election commission was also removed.

Earlier to 42nd Amendment, Indian Judiciary was unified, but the amendment restricted the power of High Court to only adjudicate upon the validity of State legislation and Supreme court on Central legislation. A new provision was added as Article 131A, providing only Supreme court exclusive jurisdiction to determine the question relating to central legislation. Article 226A and Article 228A restricted the high courts. It was also added through Article 144A and 228A that at least seven judge bench would sit to decide a question of the constitutional validity of Central Law and the legislation can be held unconstitutional only with a two-thirds majority.

Article 352 was amended to authorize the President to declare Emergency not only throughout the country and but also in any part. For this, some necessary changes were made in Article 353, Article 358, and Article 359. Earlier the proclamation of Emergency under Article 356 needed parliamentary approval to operate at the end of every six years, but now this period was extended to one year.

Through the change in Article 31-C, an attempt was made to give primacy to DPSP over Fundamental rights. Though no change was made directly in the articles related to fundamental rights. A certain changes were made to dilute its effect. The article 31-D was added to enable Parliament to make the law to prevent and prohibit Anti-national activities. Also, the laws made under article 31-D was forbidden to be held void for being violative of Article 14, 19 or 31.

The amendment added few more Directive Principles, viz Article 39-A, Article 43-A, Article 48-A. Article 39 (f) was also redrafted. Article 31C was amended and provided that no law giving effect to Directive Principles will be held void for being inconsistent with any of the rights conferred by Article 14, article 19, or article 31. It was one of the most controversial provisions of the amendment – Prioritizing state policy director principles in comparison to fundamental rights

When another notorious provision of the 42nd amendment was about the ‘amendment to the Constitution’. A few years back Supreme Court declared the historic Judgement in Keshavananda Bharati Case. Where it set a scale to amend the Constitution, but the 42nd Amendment also squeezed these scales. After this amendment, the constitutional amendments made by the legislature could not be challenged in the Court on any grounds. Also, the membership of MPs and MLAs could not be challenged in the Court. In case of any dispute. The right to decide on his membership was given to the President only, and the tenure of the Parliament was extended from five years to six years.

Indira Gandhi faced her worst defeat in the elections that followed Post-emergency. And for the first time in Indian history, a non-congress led government was formed in India. In the leadership of Morarji Desai, Janta Party Government started the work of reforming the Constitution. The government felt the need of introducing some more amendments to amend the Constitution. which was damaged by the amendments. 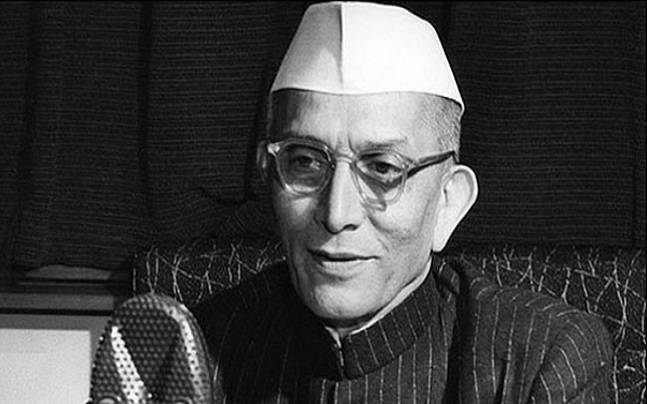 The powers of the Supreme Court and High Courts were provided back to them through the 43rd Amendment. With the strengthening of the Judiciary and removing the 42nd amendment, the 44th Amendment has also done the task of strengthening the Constitution even more than ever. This amendment did many changes to escape the situation like the 42nd Amendment in the future. The term “Armed Rebellion” was added in the place of “Internal Unrest” in Emergency related provisions. Along with this, this amendment also strengthened the fundamental rights.

During the election of the sixth Lok Sabha, under the political program of election manifesto. Which was published by the Janata Party. Cancelling the 42nd constitutional amendment was the primary thing written. But after obtaining power a viable approach was adopted. Based on virtue about this, instead of canceling all the provisions of the 42nd amendment. The 43rd and 44th constitutional amendments were introduced to remove the harmful provisions introduced through 42nd Amendment.

Want to work as a Research Intern with Centre For Constitutional Research and Development? VISIT HERE for detials.

The Doctrine of Basic Structure in the Indian Constitution: A Critique