Recently, the Supreme Court upheld the order made by former Karnataka Legislative Assembly speaker K.R. Ramesh Kumar, disqualifying 17 MLAs from the Karnataka Legislative Assembly following several events preceding the House in the course of the past few months. The tumultuous period was followed by the filing of a writ petition by the disqualified MLAs separately which was clubbed under the name of Shrimath Balasaheb Patil v Hon’ble Speaker of Karnataka Legislative Assembly and Ors. (Writ Petition (Civil) No. 992 of 2019). This decision of the Supreme Court brought the age old issue of political defection and disqualifications in limelight. While this judgment majorly concurs with the former order passed by the ex-speaker K.R. Ramesh Kumar, it lays down several pertinent facts relating to the power of the speaker to disqualify, the wrongful activities of the legislators etc.

BACKGROUND OF THE ISSUE

The issue dates back to the 2018 Karnataka Legislative Assembly elections, held on 12th May 2018, to 222 constituencies, wherein BJP emerged as the single largest party winning 104 seats while Congress stood a close second. Congress, along with JD(S), formed a coalition government with 120 seats. However, some MLAs of the Congress and the JD(S) started defying party orders, and revolting against their political parties, and subsequently started tendering resignations, which led to the collapse of the alliance and leading to a takeover by BJP led by B.S.Yediyurappa.

It was requested that the speaker should disqualify those members who had resigned under the Anti-Defection laws.

The speaker did not immediately accept the resignations, claiming that he has to scrutinize them in consonance with Article 190(3) of the Indian Constitution. The members alleged the speaker of procrastinating with the underlying motive to affect their prospects. It was argued that the decision regarding acceptance of resignation should be given without any delay. The legislators also stated that they should be given a chance to present their arguments with reference to the allegations of defection.[1]

The rise in the number of legislators who defected from one party to another in the 1960s led to the need for the creation of laws against defection. With the passing terms, an increase in cases where an elected representative was appointed as a member of one party, but left the part for another, were observed. Laws against defection were urgently required.

In pursuance of the abovementioned ideal, the amendment inserted the Tenth Schedule into the Constitution in order to suppress the evil of defections. The 52nd Amendment Act, 1985 also amended Articles 101, 102, 190 and 191 of the Constitution regarding vacation of seats and disqualification from membership of Parliament and the State Legislatures.

Article 191 of the Indian Constitution lays down grounds for disqualification of membership, either as a member of Legislative Assembly or Legislative Council of State. Sub Clause (2) states that if a person has been disqualified in relation to the Tenth Schedule, he shall be disqualified from membership to either assembly.[2]

SALIENT FEATURES OF THE SC JUDGEMENT

The judgement was delivered by a three judge bench comprising of Hon’ble Justice N.V.Ramana, Hon’ble Justice Sanjiv Khanna and Hon’ble Justice Krishna Murari. The judgment was marked by several observations and principles. At the very outset, the court expressed its dismay at the way in which the petitioners chose to circumvent the High Court and approach the Supreme Court, while duly conceding that despite the Supreme Court having the jurisdiction to entertain the matter directly, the bypassing of the High Court is not appreciated by the bench.

The Court observed that the speaker, while acting in matters regarding disqualification, acts as a quasi-judicial authority and his decisions or orders can be duly challenged. The Court also elaborated upon the Speaker’s scope of inquiry stating that the Speaker’s scope is only limited to ascertaining whether or not a resignation is genuine or voluntarily submitted. Underlying and extraneous factors directly or indirectly affecting the resignation are immaterial and cannot be taken into consideration by the speaker.

Several leaders from various political parties have criticized BJP over the entire crisis and demanded answers on various pertinent questions relating to the issue. Rajya Sabha proceedings were halted midway during the Question Hour and were eventually adjourned for a period of time. Opposition parties wanted a discussion on the issue which was termed as out of place considering the ongoing Question Hour. Several factions of people expressed different opinions regarding the whole issue; with some stating that the MLAs should be tried under the Anti-Defection laws as the motive of resignation seems to be to topple the government, while others concurred with the decision of the Court. Several leaders have called for a ban on the candidates involved to contest further elections, as in the present scenario, the legislators are eligible to stand for the by-polls scheduled in December. It has also been argued that these ministers shall be prosecuted for involvement in several scams and other personal issues. Common citizens took to twitter to express their dissent and anguish over the contemporary scenario, and also resorted to jokes and memes on a lighter vein. [4]

The speaker is seen as the true guardian of the rituals of a parliamentary democracy, especially in the Indian context. His unique position is illustrated by the fact that he is placed very high in the position of powers in India, next only to the President, the Vice-President and the Prime Minister.

Many questions have been raised regarding the partiality of the speaker on matters relating to disqualifications arising from defection and other causes, Therefore, it has been suggested in lieu of the Karnataka crisis that an authority like the Election Commission should decide on matters like disqualification to ensure impartiality. However, it is imperative that the impartiality of the speaker is assumed. In lieu of contemporary developments, the order of the speaker should be followed and stringent actions must be taken against the errant legislators to prevent potential malpractices in the future.[5] 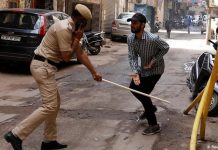 Fight Against Corona or Dignity