The revelations by Edward Snowden about mass surveillance in mid-2013 led to an explosion of interest in surveillance and user privacy in India.[1] In India, we have a strange mix of great amounts of transparency and very little accountability when it comes to surveillance and intelligence agencies.

The below contains some examples of surveillance mechanisms existing in the country at the moment:

Many of the programmes listed above (to be discussed in length in the project paper) have overlapping jurisdictions and in some instances are cross-linked with each other to provide greater coverage.

Currently, two government agencies, the Intelligence Bureau (IB), and the Research and Analysis Wing (RAW) plus seven others, including the Central Bureau of Investigation, the Narcotics Control Bureau, National Intelligence Agency, Military Intelligence of Assam and Jammu & Kashmir and Home Ministry are authorised to intercept and monitor citizens’ calls and emails, under the guidelines laid down by the Supreme Court, The Indian Telegraph Act 1885, Rule 419(A) and other related legislations.

What we have today is ubiquitous surveillance and whether we like it or not, all of us are being watched all the time. This paper aims to achieve a comprehensive, doctrinal understanding of the constitutional right to privacy, as evolved, understood and implemented in the Indian context. 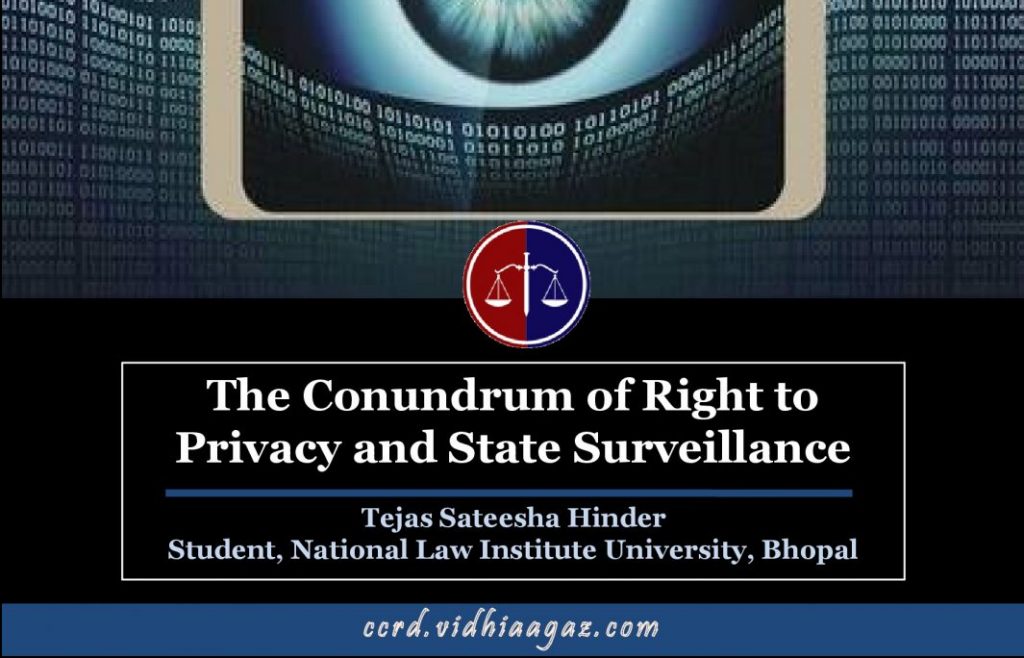 There are no laws that allow for surveillance in India. The two laws covering interception are the Indian Telegraph Act of 1885 and the Information Technology Act of 2000, as amended in 2008, and they restrict lawful interception to time-limited and targeted interception. With the Right to Privacy being upheld as a Fundamental Right, it has become imperative to understand where we stand with regards to the protection of personal data from the state and what are the possible measures to protect personal data? It is also important to understand the repercussion of any such law which restricts the privacy of an individual.

An insight into the views of the academicians and research scholars

Gautam Bhatia[2] specifically refutes the fact that mass surveillance is facilitated by the Indian Telegraph Act, 1885 (“Act”) especially by Section 5. He substantiates his argument by questioning whether Section 5(2) is relevant at all to the question of bulk surveillance, a la CMS and NETRA. The author cites three reasons to affirm his argument. First, the Indian Telegraph Act is an 1885 legislation, drafted at a time when bulk surveillance was unimaginable, and aimed at addressing a very different problem i.e. interception of individual telegraphic messages for specific, short-term purposes. Secondly, the term “persons or class of persons” in Section 5(2) is indicative of identifiable individuals (or classes of individuals) and is not meant to include the citizenry as a whole. And thirdly, the Supreme Court’s guidelines militate against reading permission for bulk surveillance into the Act. Section 5(2), therefore, does not authorize bulk surveillance and does not authorize the CMS or NETRA. The author has analysed privacy exclusively from the perspective of the judgments by the Hon’ble Supreme Court of India and how it has evolved the right to privacy.

With due respect, the article falls short on the legislative perspective of the right to privacy. It is a remarkable dichotomy to explain a wide topic like privacy, the author chose to explain it from the narrow confines of judicial reasoning. The author also takes the liberty to declare that mass surveillance results in disclosing all details of personal life to the government, this statement has not been substantiated and appears to be a mere apprehension against the policy decision of the government. The author also makes certain deliberate omissions from his text, for instance, the very legitimate concern that creating a private sphere only serves to justify relations of non-state domination and oppression within that sphere – both symbolically, and actually. It presumes instead of arguing for the basic philosophical idea of the ultimate unit of society being indivisible, atomized individual selves living in hermetically sealed ‘zones’ of privacy.

Further, Addison Little[3] makes a rather bold claim stating that governmental, infrastructural, and cultural barriers will likely impede public opposition to CMS, leaving Indian citizens largely without redress to vindicate their civil liberties. This is a direct attack on the democratic values of our nation. The author remains ignorant of the grievance redressal mechanism of our country and how it has always come to the rescue of the people of this nation.

Recent research[4] also states that a cause of concern among citizens is that surveillance continues to be an exclusive domain of the executive arm of the government which insists on keeping the public in the dark. It further states that there are no provisions for public or judicial oversight of the legislative process and in such a scenario, one cannot help but be wary of abuse of power. The said argument is fallacious on the premise that judicial oversight is part of the basic structure of the constitution and it is not right to say that any legislative or executive action is beyond the scope of judicial oversight. Further, the author does not provide a logical alternative to expanding the domain of privacy from the executive. Such an argument is not useful without any viable alternatives and looking for alternatives here might result in even more disastrous events.

Who will Judge the Judges?